In my utter failure to keep up with photography and blogging, some new outfits arrived, were worn, and got put away again without any fanfare.  Probably a lot of them, in fact.  I only have photos of three, one on Yuzu and two for Ivy.  I’m going to share them now, if only to break up the monotony a bit.

It’s sort of an awkward photo, I know, but that’s because I literally just decided to snap a couple of pics right after I got her changed into it.

This one is a little better: 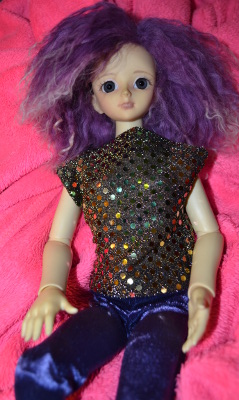 Okay, maybe not much better, but…

…anyway, she’s never going to wear this outfit again, because those leggings only barely went on.  Either Yuzu is stockier than more recent MSD-sized dolls, or the leggings were designed for a slimmer type.  (I’m thinking I might put the outfit on Houston at some point, though since she’s not a wigged doll, it would lose something in the translation.)

I think I mentioned back at Halloween that I had bought a three month subscription of new dresses for Ivy, right?  Well, here’s the second month’s dress: 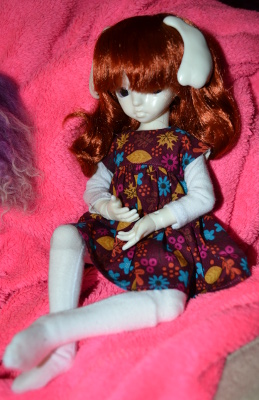 As you might guess by the bit of Yuzu’s (formerly Ivy’s) wig to one side, this was a spur-of-the-moment photo, too.  (I don’t think all three garments arrived at the same time; I think it just took me a while to take the time to put any of them on their respective dolls.)  I’ve found that Yuzu’s ears can stay on through this wig, but they really don’t like doing so. 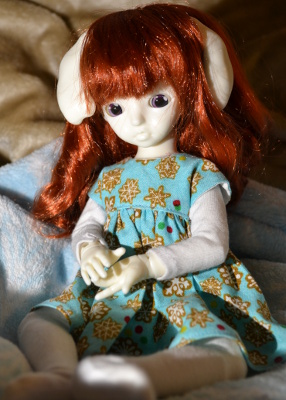 This, of course, is the final dress, the one for winter.  It’s a sweet fabric, isn’t it?

*sigh*  It’s really annoying to me that my life is such a mess that I still haven’t given Ivy her face-up.  I mean, I’ve had her over a year now!  😦  I suck.

Hmm…I should get some pictures of my other new Hujoo (from this past Black Friday sale), and of Suve’s new outfit.  That shouldn’t be too difficult.  Maybe that’ll be the next of these “catching up” posts.  Though I’ve got an all text post I’ve been meaning to write since, like, last summer…

This site uses Akismet to reduce spam. Learn how your comment data is processed.

My BJD creation blog. Here's where my sewing creations and projects are showcased. Some outfits are for sale. Please use the tags & catagories to navigate this blog. I love comments and reviews!

Musings on Daily Life in the Ancient and Early Medieval Mediterranean By Sarah E. Bond

Celebrating the women who create history

Where Textiles, Fashion, Culture, Communication and Art Come Together.

Rose B. Fischer
The Social Historian

Adventures in the world of history

Zounds, Alack, and By My Troth

A tragical-comical-historical-pastoral webcomic by Ben Sawyer

never too old to play with dolls