In my utter failure to keep up with photography and blogging, some new outfits arrived, were worn, and got put away again without any fanfare.  Probably a lot of them, in fact.  I only have photos of three, one on Yuzu and two for Ivy.  I’m going to share them now, if only to break up the monotony a bit.

It’s sort of an awkward photo, I know, but that’s because I literally just decided to snap a couple of pics right after I got her changed into it.

END_OF_DOCUMENT_TOKEN_TO_BE_REPLACED

Okay, not the most standard greeting, but New Year’s Day is a Monday, and that’s still dedicated to Blind Box Mondays.  (No worries; I have a super-special one to post tomorrow.  Very festive. 😀  )

Anyway, some of my girls are getting ready for the big moment that we leave this crappy year behind us!

Ivy has this pretty kimono to wear, complete with a matching hairbow!  (At least, I assume that was meant to go in her hair, and not around her waist…)  I probably have the kimono put on wrong; I’ve never had to try putting one on before that didn’t have, you know, velcro or something.  I’m not sure which side is supposed to go on top, left or right; I think there’s a meaning to which one is going under the other, only I didn’t have the Internet turned on when I was dressing the dolls, so I couldn’t check.  😦

END_OF_DOCUMENT_TOKEN_TO_BE_REPLACED 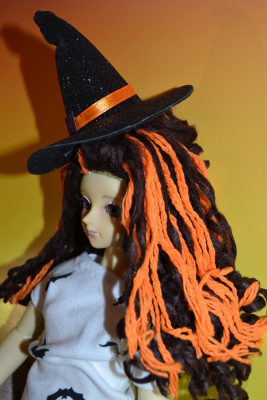 I’ve been assembling all sorts of seasonal stuff for a fun (if less coherent than my first Halloween post) All Hallow’s Eve post.

And I do mean all sorts.  Like, even candy containers.

That little Dracula came with Nerds candy inside him.  The graphic on the plastic wrap showed several colors of Nerds, so I was expecting a bag of rainbow Nerds filling most of his interior.  Instead there was one little box of the pink ones.  (You know, the little boxes you get in the ten zillion pounds of candy to hand out to Trick-or-Treaters bags.)  Fortunately, I wanted the Dracula tin, not the candy, so it didn’t matter. 😛

I’ve got seasonal pins, too. 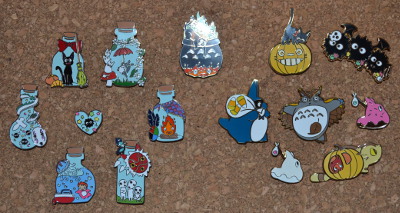 This was my whole Studio Ghibli fanart pin collection when I took the photo; there’s two more kodama-themed pins now. 😛  (And more of various sorts on the way.  I really need to stop backing so many enamel pin Kickstarters…)  Anyway, as you can see, the set on the right is a Halloween-themed set. 🙂

Though those are obviously Clawdeen and Frankie, the seller (on Storenvy, I think it was) didn’t identify them as such, for obvious reasons.  I had to get that magpie pin because of some books I read over the course of this year. 😀

Isn’t that little witch the cutest?  (The crabby Jack-o-lantern is related to the various crabby fruit plushies I posted about some time ago.)

But pins aren’t what you’re here to see, so here’s more fitting photos. 🙂

Earlier this month, I decided to go (for the first time ever) to Build-a-Bear, because I’d seen how cue their bears were after they donated some to an event at work.  And of course they had some seasonal products available, including a very cute Dracula bear, and this bat.  I couldn’t resist the batbear. 😀  Given that she has BAB written very prominently on her paw, I’ve decided to name her Babs.

Ironically, when I got home that day, guess what I found in a package on my porch? END_OF_DOCUMENT_TOKEN_TO_BE_REPLACED

So, for the last few posts, I’ve mentioned having plans for the blog for the month of June, without ever mentioning what they are.

So now I’m mentioning what they are. 😛

As you may or may not be aware, June is Pride Month.  I’m asexual myself, but I’m very supportive of the LGBT community.  And in today’s political atmosphere, I feel like it’s very important to voice my support.  Or in this case, photograph it.  So my posts this month are going to be either rainbow-themed or same-sex romantic (but always safe for work!) photos.  You’ll be seeing a lot of Sailor Uranus and Sailor Neptune. 😉  (But also some other anime, Monster High, possibly Vocaloid if I can figure out the right way to handle it, and anything else I can think of that actually seems appropriate.)

Today, I’m just going to recycle some rainbow-themed photos that have been on the blog previously.

New photos will appear next time I post.  (And I’ve already taken several photos of the Uranus and Neptune Figurarts, so I’m almost kinda sorta prepared!)

I’m so unmotivated to take pictures right now.  I can’t explain it.  😦  Anyway, because of that, there’s a lot of stuff I want to show you that I didn’t end up taking pictures of.  (This is, after all, like two and a half months’ worth of purchases we’re talking about.  And I’ve been down in the dumps, which means I’ve been spending more money, ’cause I’m a moron.)  Hopefully I’ll get motivated later on and take more pictures.  Hopefully better ones, too.

Anyway.  So new clothes and wigs were something I wanted to fill you in on.  I finally got Ivy some new shoes: 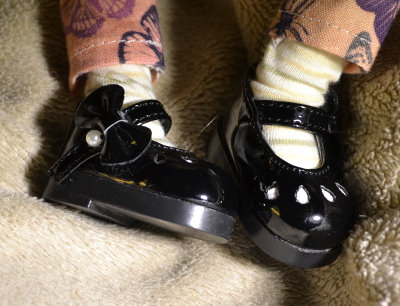 There’s something massive about them that doesn’t really come across in the photo:  in person, they’re like a girly version of the Frankenstein monster’s boots.  And they don’t entirely match Ivy’s butterfly outfit.  (Though I’m admittedly at a loss to guess what would match it.)  Fortunately, I got her a new outfit that matches her rainbow booties, but I’ll show you that a little later on.

END_OF_DOCUMENT_TOKEN_TO_BE_REPLACED

Yes, it finally arrived!  Yay!  The post office finally found it in whatever limbo it’s been in for the entire month of December, and today they put a “Second Notice” in my mailbox.  (Even though the first one was in November.) 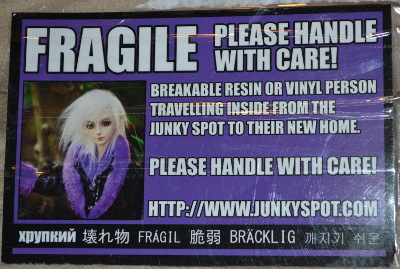 Picking it up was weird, though.  Like, all the crazy people were out today or something.  This older man was hassling the woman behind the counter because she couldn’t do what he wanted her to do because the computers were down.  He kept on pushing, like somehow she’d magically be able to do it without the computer system, and when she couldn’t, he started comparing the service to being in a third world country.  Then the next people in line wanted a passport, even though that branch had all these big signs saying that they only did parcels and holding mail.  Ugh.  Why are people so annoying?  At least I was in the right place, and was smiling and friendly.  (Despite the month-long delay in getting my package.)

Aaaanyway, here’s what was in the package.  (Warning, nude, eyeless dolly photos ahead!)

END_OF_DOCUMENT_TOKEN_TO_BE_REPLACED

My BJD creation blog. Here's where my sewing creations and projects are showcased. Some outfits are for sale. Please use the tags & catagories to navigate this blog. I love comments and reviews!

Musings on Daily Life in the Ancient and Early Medieval Mediterranean By Sarah E. Bond

Celebrating the women who create history

Where Textiles, Fashion, Culture, Communication and Art Come Together.

Rose B. Fischer
The Social Historian

Adventures in the world of history

Zounds, Alack, and By My Troth

A tragical-comical-historical-pastoral webcomic by Ben Sawyer

never too old to play with dolls